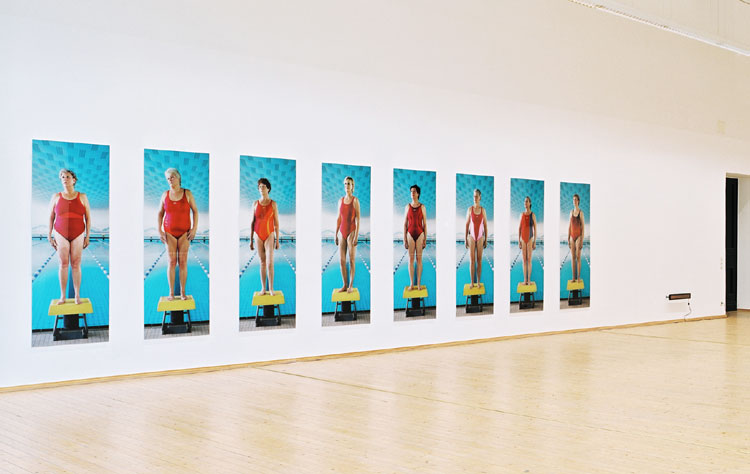 The work Siegerehrungen (Presentation Ceremony) consists of 10 large format, full-figure portrait photographs of female swimmers, who were, between the 50s and 70s, very young, successful, professional sportswomen of the German Democratic Republic. To aid the understanding of the context, the work is supplemented by a scrolling LED-display showing factual information (name, times, distances) relating to these very short-lived careers.

The work is about time, memory, success and body politics. We asked the women to stand on the starting blocks of Leipzig's training pool, in the pose they had had to assume at presentation ceremonies during their time as professional sportswomen and, while posing, to remember these moments. Despite their time worn bodies, the women, aged between 40 and 66, responded positively to our request of posing in modern bathing costumes.

The swimmers appear here in a row, as a collective that lives on in memory, albeit one now lacking in numbers, rankings, and scores. Inscribed now on the surface of their bodies - despite shared memories and similar attitudes - are individualized traits.
Photographs of aged or older (female) bodies are rarely disseminated in the media. Such images fail to conform to the accepted image of the body demanded by both the media and by society at large. This work, then, adopts a critical stance toward contemporary political, economic, and cultural discourses.

Presentation: 10 lambda prints, each 186 x 70 cm, under Plexiglas, LED display 15 x 50 cm, shown as a series; also possible for group exhibitions with limited space are presentations including a minimum of 5 prints and LED display.