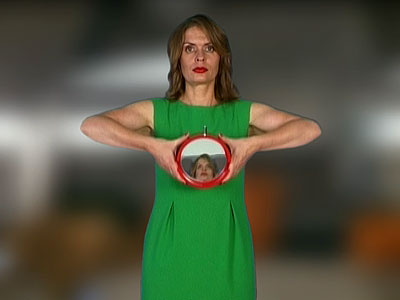 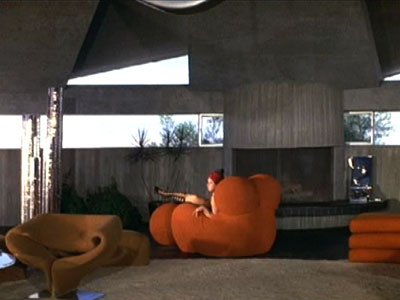 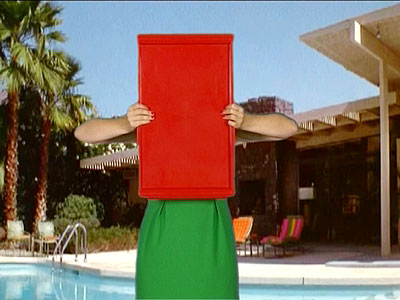 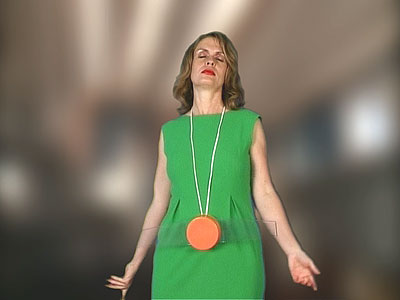 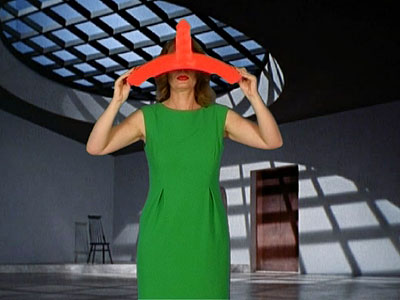 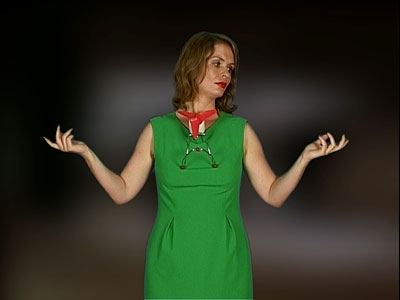 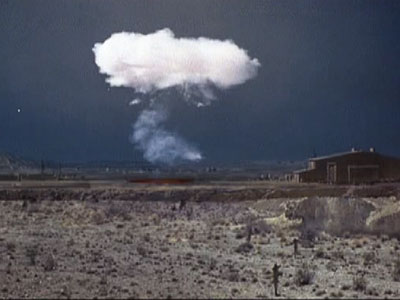 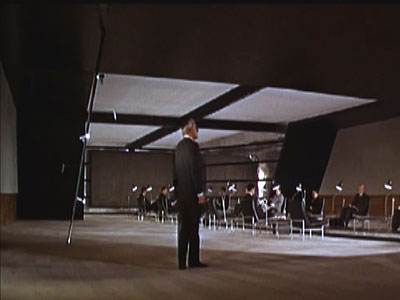 The reality of Alba's dream
The dream of Tina's existence

In the video Kunstwerke 36 the objects and the kitchen implements are demonstrated in a setting that recalls a television studio from the period, with its masked and digitally reworked surroundings. Selected from James Bond films of the 60s are mainly the settings and backdrops of legendary German-Jewish-American set designer Ken Adams, who fought Nazi Germany as a British combat pilot. After the war, he designed large-scale, innovative, audacious film sets that generated fantasies while giving form to the utopian visions and illusions of the contemporary Zeitgeist.

During the "instructions for use" performance, the stoical housewife - who oscillates between exertion and devotion - responds to the rhythms and lyrics of Ide's song "okay", whose electronically generated beats invokes, samples and sets to music Allen Ginsberg's lecture on "meditation and poetry". Ginsberg's beat-poet directives also take us back to the 60s era, when intellectual, poetic and cultural upheavals fundamentally altered attitudes toward life.The generated, cool sound of "okay" recalls early electronic and minimalist compositions, thereby carrying us once again back to the period of the 60s and 70s.

The de-emotionalized performance gestures and repetitions also allude to minimalist influences emanating from those times, as well as to artistic practices that are conceptual and structural in orientation. The presence of the voice, together with text, thematises corporeal presence and the perilous relationship between mind and body. With serious humor, the sequences of bodily actions, set within their digitally generated, collaged, and sampled structures and tied directly to exercise, are explicitly recommended for mimicry. Again and again, the tense doggedness of the performance leads to explosions which are designed to allow attempts at meditation to commence.

The video consists of 6 segments, each of which introduces 6 household objects; 36 appliances or furnishings in all are thereby designated as works of art. The length of each segment is determined by the duration of the song, which lasts 4.06 minutes.

Presentation in an exhibition context: