The Covergirl project is concerned with the assigned meanings of photographic images, the circumstances of their circulation, reception and context in connection with the social systems of politics and art; as well as with memories and the reconstruction of history, the past and the present.

The point of departure, respectively the objects of investigation, of this, to a certain degree essentially biographically motivated work, are two b/w 35mm negative films from the year 1983 that were taken in a landscape in Mecklenburg, and a publication from 2007, which was created in collaboration with the Museum of Contemporary Art Leipzig and the Spanish artist Dora Garcia. 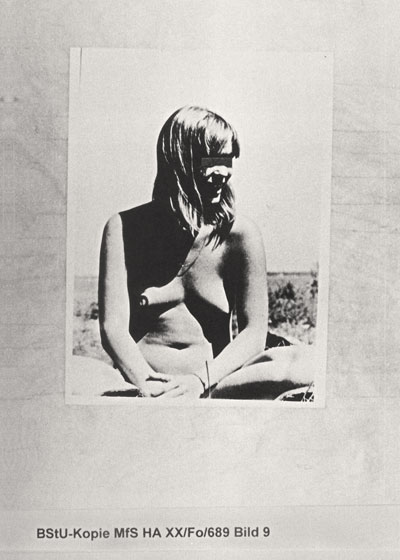 The cover of this publication shows a picture that is based on a nude photograph of Tina Bara with a black bar across her eyes together with the text BStU-Kopie MfS HA XX/Fo/689 Bild 9. In the first chapter of the artist book, and as a framed picture in the context of a gallery, the image appears in a context with other pictures of a group of young women which was relevant enough to fill several files in the mounting archives of the Ministry for State Security – the control system of the GDR..

“Wespen” (“Wasps”) was the code name for an operational procedure that focused on the group “Frauen für den Frieden” (“Women for Peace”) – an oppositional left-wing group in the GDR that was directed against growing militarism in their country that also permeated civil life, and the armament that was part of the Cold War.

Starting with the discovery and the circulation of the “covergirl” and the collection of images connected to it - originally private keepsake photography by ambitious amateur-photographers (Katja Havemann and Tina Bara) with a political background, then a document and evidence for the Ministry for State Security, then an object of art – Alba D’Urbano and Tina Bara explore current issues concerning art and media practices, as well as the subjective reconstruction of personally experienced history. Research, analysis, and poetical-metaphorical narration are complexly and closely interrelated in the multi-media project. Furthermore, the subject of the “nude female body by the lake”, firmly established in the history of Western art for centuries, here receives a suitable and concrete contemporary appropriation from a feminine and political perspective.

The entire work is composed of several parts, all of which supplement each other and form an installation, while they also work as individual pieces.