Bellissima: Schwebender Ring (Bellissima Floating Ring) takes the mother-child motif further while linking memories of contemporary history with personal moments. In the video installation Orbit, the memory of a childhood photo's motif (mother Pina Baldacci and daughter Alba) is brought to life by the appearance of Tina and her daughter Teresa on camera filmed by Alba. The black-and-white image from the album of the D'Urbano family was taken somewhat later than Visconti's "Bellissima." It shows mother and child together behind of the newly rebuilt travertine fountain on the central square -- bombed during the war -- of the small town of Tivoli, near Rome. Captivating are the similarities between the scenarios of photo and film still respectively. The location of today's performative staging is the fountain at Strausberger Platz, built in approximately the same period when the family photo in Tivoli was taken, and alluding to a theme which had played a role already in Siegerehrungen and Kunstwerke: the inscription of ideologies and utopias in design and architecture from the period which shaped the artist's childhood.

In a way analogous to the treatment of Alba's photograph, Tina Bara takes up an activity from her own childhood: to stand around in front of memorials, including fountain sculptures, while being photographed, taking possession of such structures, running around their perimeters. Of course, her daughter also takes part. The entrance of the mother and daughter is polished and choreographed. The action, that is say, is prescribed as being relatively long and as rigorously serial, the circling of the fountain undertaken in marching steps, eyes directed to the right and left before the camera, invoking memories of the location and of formative rituals (those associated with the Socialist military parades taking place on Karl-Marx Allee and with displays of athletics drills).
The action is overlaid by a sound composition from offset parts of the Oktoberklub band's song from 1967. The political band of the 60s GDR joined socialist political texts with guitar dominated elements of folk. While marching around the edge of the fountain, the rhythm and text fragments “Sag mir wo du stehst, und welchen Weg Du gehst”* came to Tina Bara's mind, a catchy song from her childhood.
In the Video pieces of Posa, mother and daughter appear before the film camera, posed as in a photo portrait, and simply gazing toward the lens. In connection with the action, the location is presented in an almost analytical manner.

The fountain with the "Schwebenden Ring" ("Floating Ring"), designed and constructed in 1967 by the wrought iron artist Fritz Kühn, stands at the center of Strausberger Platz on a traffic island surrounded by a rotary. Normally, this surface -- with its large fountain -- is inaccessible to pedestrians, so its temporary occupation and use qualifies as a possible strategy for reappropriating the location. Both the square -- designed and laid out between 1951 and 1964 by Hermann Henselmann, a star architect in the GDR -- together with its complex of buildings, is stylistically dependent upon Soviet Neoclassicism, while betraying just a hint of Modernism. Among Berlin's recently rediscovered sights, it is experiencing a renaissance. Found in the "Haus des Kindes" in place of the basement theater and café is a design shop for interiors, while the ground floor of the "Haus Berlin" now accommodates a bank.

A small monitor shows the video work Wasserspiele (trick fountain) in which the daughter, unfazed by the actions surrounding her, meticulously combs the hair of her doll and looks after her pigtails during a marching break. The procedure is accompanied by the rush of water and the rising and falling of a word stream that solely modulates the word 'bellissima'. A reference to the video from Abramovic  “Art must be Beautiful” is also instinctively apparent.

* Tell me where you stand, and which way you are going 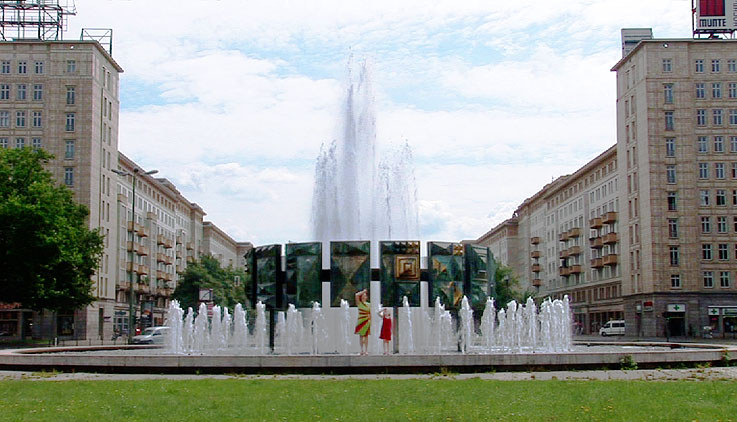